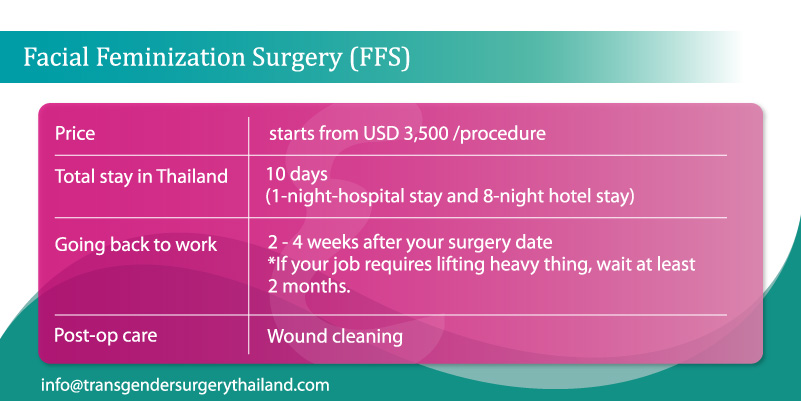 During puberty, testosterone causes many changes in Male to Female (MtF) bodies, including development of the skull and facial bones, as well as cartilage in the face and neck. After puberty, although hormone therapy can make the skin of the face look softer and can bring about minor changes to the fat/muscle structure of the face, the basic structure of the face and neck can’t be changed by hormones; only surgery can reshape the contours of bone and cartilage.

MtFs have varying beliefs about face and neck surgery. Some feel it is very important in helping reduce their gender dysphoria. Others are concerned that MtFs may feel pressure to get face and neck surgery to conform with conventional standards of attractiveness of women. Like any other types of SRS, there is no right or wrong answer in terms of whether to get face or neck surgery: it is a personal decision.

Brow lifting : tightening of the skin on the forehead and raising of the eyebrows

Jaw reshaping : removing bone from the back corner of the jaw, possibly with removal of part of the masseter muscle to make it less prominent

Chin reshaping : removing bone from the chin and reshaping it so it looks more tapered, less square, and shorter

Chin augmentation : using implants if the chin is receding

Nose reshaping/reconstruction : to change the appearance of the nose is called rhinoplasty. Some MTFs want their nostrils or the tip of their nose to look different. Other times surgery on the bridge of the nose will be recommended to MTFs who are having forehead surgery, so the flow from nose to forehead looks smooth. The surgical changes to the nose that can be done as part of FFS include:

Tracheal shave : to reduce the size and noticeability of the laryngeal prominence.

Most FFS techniques can be done at any point in transition (at the start, in the middle, or after you have had other surgeries). If you want both forehead and nose surgery, it is recommended that they be done together, as changes to the forehead can affect the shape of the nose.​

The aftercare instructions are different following different types of facial surgery and depend on the specific technique used. Talk with your surgeon before surgery to make sure you understand what to expect and what you need to do after being discharged from the hospital, as well as pain treatment options.​

Numbness (most are temporary)