Overview
The term vaginoplasty includes several procedures designed to transform the “male” genitals into “female” genitals. The surgery is done as one step (removing the testicles; partially removing the penis; and creating a vagina, clitoris, and labia.)​ 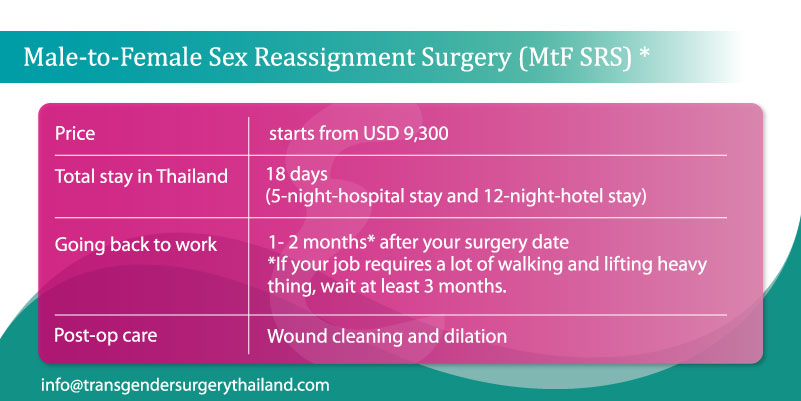 The most common technique for creating a vagina is the penile inversion. In this technique the penis is skinned and the skin is turned inside out to line the walls of the new vagina. Our surgeons have developed their own technique to make the vagina longer or wider with the Scrotal Skin Graft technique. If the patient has small penis with less scrotal tissue or lost the depth after previous SRS, the surgeon will apply Sigmoid Colon Vaginoplasty technique. A segment of your large intestine will be used to create the vagina if the penile inversion fails or is not possible. As part of the penile inversion, a small section of the head of the penis – the part that is most sensitive – is used to create a new clitoris.​

Erectile tissue, which gives the penis the ability to get hard, will be removed so the entrance to the vagina and the clitoris don’t get overly swollen when you get sexually aroused. The tube that carries urine from the bladder to the outside of the body (urethra) is longer in “males” than in “females,” and in a slightly different position. The urethra is shortened and repositioned as part of vaginoplasty. The prostate (which sits at the neck of the bladder, around the urethra) is not removed.​

Patient must be at least 18 years of age and if patient is under 20 years old, parent permission will be required.

Patient must be diagnosed with at least one of the following disorders: Gender identity disorder, gender dysphoria, or associated conditions and receive an approval from a psychiatrist (MD), psychiatric social worker (PhD), or clinical psychologist (PhD).

Patient must have undergone at least one year of anti-androgens or/and female hormones.

Patient is required to have lived full-time in the cross-gender role for at least one year.

Fistula: opening between the rectum and new vagina

​          The result you will get varies according to the patient's conditions. Our surgeon will evaluate your genital area in order to see your penile/scrotal skin availability and suggest which technique will be applied. The surgeon will also discuss with you your expectation, the realistic result after surgery and advantages and disadvantages of each technique.

In vaginoplasty, the surgeon’s goals are:​

To preserve the ability to have orgasms.

To create a clitoris, labia, and opening to the vagina (introitus) that look realistic and maintain good touch sensation (i.e. you can feel it when they are touched).

To change the structures of the urinary tract so you urinate downwards and in a steady stream.​

Recuperation in Bangkok for at least 14 days before safely flying home is obligatory.

Recuperation at home for 4-8 weeks before returning to work is required.

Overweight - Some medical clearance tests are required before your departure. Some hospitals/doctors will apply some extra-charge on SRS package for the extra post-operative care.​

Age more than 50 years – Some medical clearance tests are required before your departure such as routine test and stress test.​

HIV positive - The patient must have CD4 value more than 500 and zero or non-detectable viral load. An extra charge 50% of the original price will be applied for disposable medical supplies for a HIV positive patient.​

** The SRS package price excludes any personal and other additional expenses beyond surgical fees and packages caused by the patient. This includes personal medical treatments/analysis for pre-existing illness.

Discontinue hormones (including spironolactone) prior to surgery, 2 weeks for oral tablets and 4 weeks for injection.

Stop smoking 2 weeks prior to surgery

Discontinue drugs that may interfere with blood clotting, such as aspirin, ibuprofen and vitamin E