Patients with sizable penis: found a gap above clitoral hoods and scrotal skins used to create labia majora are over in quantity and not in an ideal shape.

Patients who have already undergone circumcision: the lack of foreskin (penile skin at the tip) results in the less-sufficient labia minora which may not be able to reach to posterior fourchette and creates an unnatural result

What can you benefit from the Diamond technique?

The technique is named after the diamond shaped incision. Dr. Burin’s technique is developed as an attempt to improve the external appearance of vagina, create an as-similar-as-possible vagina to genetic women and take SRS to another step. This technique lessens the possibility of vagina correction after the operation. However, this technique requires lots of experiences and surgeon’s attention-to-details qualification to avoid any complication such as nerve injury. 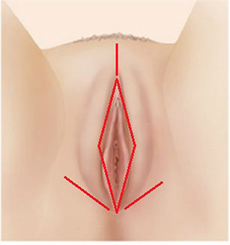 And the possible and expected results are:​

The vagina that most resembles the genetic women. It creates volumed labia minora that reaches as deep as possible down to posterior fourchette. The vulva opens slightly and looks natural.

The scars are small and hard to be recognized.

The first scar: vertical scar at mons pubis with 2-3 cm length which will be hidden behind public hair.

The second scar: V-shape scar with 3-4 cm length on both sides. The scar is positioned in the area where it will be hidden in natural skin creases/folds after the time’s gone by.

For patients who have already undergone circumcision and worry about the final shape of vagina, you have more chance. The narrow and natural-looking labia minora is conceivable if you have enough penile skin in total.

The tension rate is less and it decreases the possibility of skin necrosis and wound separation after the operation. Patients recover faster, the wound heals itself in a short amount of time and leave only an insignificant scar.

Single-stage operation. The percentage of patients coming back for vagina correction is low

However, please be reminded that this technique is not for every patient as everyone’ concept of beauty is different. The result you get after the surgery depends on each patient’s pre-existing conditions so it is important for the patient to consider and discuss with the professionals in order to find the surgery technique that can give you the most desirable result based on your expectation.

It is our job, as an SRS consultant, to try and meet the need of our customers. We will listen to your every needs and concerns and match you up with the right surgeon and surgery technique.

For 10 years since I started my career as a Transgender surgery consultant, I have been working closely with Preecha Aesthetic Institute (PAI) which is considerably a top SRS- clinic in Thailand. Dr. Burin Wangjiraniran, one of the team members of PAI, now he has developed and introduced a new SRS surgery, Diamond technique

Dr. Burin Wangjiraniran graduated from Faculty of Medicine, Chulalongkorn University. He pursued further in MD plastic surgery specialized in vaginoplasty and became an intern under Dr. Preecha Tiewtranon,  the founder of Preecha Aesthetic Institute (PAI) who brought SRS into the light and a strong force that make Thailand a dream destination for Sex Reassignment Surgery. Dr. Burin joined the PAI’s professional team in 2008 and he was a co-author in “Male-To-Female Vaginoplasty: Preecha’s Surgical Technique” (published on Journal of Plastic Surgery and Hand Surgery in October 2014)

I asked Dr. Burin once for a reason why he chose this career path. He said with a smile. To him, Sex Reassignment Surgery is ‘different’ from other kinds of plastic surgery. It ‘changes’ people’s lives. It helps people overcome their gender dysphoria. It makes his patients delighted and their smiles are what keep him going.

These are the issues he has found from those 15 years of his career: